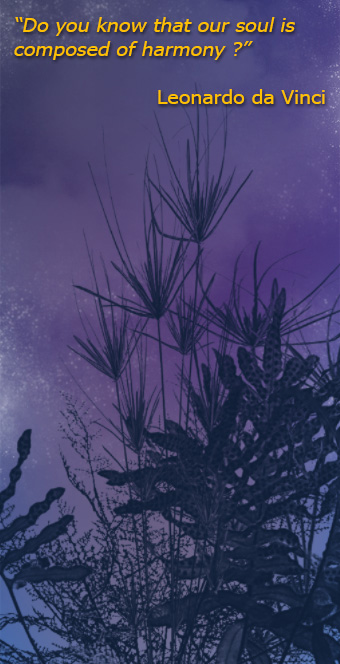 The chakras - Intermediaries between conscious and unconscious

The unconscious by its nature, its organization, its functioning and its rhythm, appears to be very different from the conscious and it is in particular through dreams, thanks to its very specific dynamics of action, that it is revealed. to the conscious.

Over time, many psychological disciplines have developed various methods aimed at deciphering, decoding and then understanding the language of the unconscious by trying to analyze dreams.

All these methods have led to the conclusion that in its essence, the unconscious has its own language, both universal since ancient times and still independent of both religion and ethnicity with the consequences that we unfortunately know too much or sex. Dreams are inscribed in the unconscious in a series of detached and distinct symbols that form a language of dreams resulting from physiological, biological, carnal, nervous, sexual, intellectual, sensitive and structural data inherent in humans.

As a result, the link that is established with the unconscious seems to be based solely on acquired knowledge, a sort of immediate and instinctive approach to the fundamental principles of any living element, regardless of its potentials.

In the West, the conscious has priority; We try to explain this or that phenomenon by using useful intellectual, pragmatic, verifiable and rational. Above all, the unconscious is recognized and preferably accepted in its artistic manifestations.

According to Eastern philosophy, the approach to the unconscious is not limited only to the realm of art. To credit a truth or this or that phenomenon, it is not mandatory to provide solid and tangible proof; it is experience itself and intuition (and therefore the unconscious) that leads to certain convictions and certainties. The subconscious evokes the chakras - the energy centers at different points in the body; and the chakras have this "primary" language in which colors, shapes and sounds echo every element of life. For this reason, we must try to dialogue with the unconscious using the language of the chakras.

In summary, there are two approaches to perceiving the world: that employed by the intellect, based on consciousness and logic. The second, based on intuition and inner certainty with its purification requirements, that is to say, the imperative need to reach this internal state where the energy of the individual circulates, totally free in his organism.

However, despite the many writings on intuition, its functioning and its role as a liaison between the conscious and the unconscious, it remains mysterious and unexplained.

Therein lies the essential goal of our work: to try to find the road which leads to this awareness and therefore to bring each one to connect thanks to the chakras, to these infinite sources of creation which reside in the unconscious. Sources inherent in each individual, aware or not of his faculties of creativity.

Chakra means "wheel" in Sanskrit. Yoga recognizes 7 chakras, or main energy centers. These are located along the spine from the tailbone region to the middle of the forehead, between the eyebrows.

Energy flows along the spine, through the central nervous system in two channels: (ida and pingala).

The combination of these two energy streams gives us all of the energy available to our body.

According to Laya Yoga, focusing on the chakras can activate the gray cells buried in our spine (of which, according to some research, we normally only use 8%), and unleash hidden creative potentials.

According to ancient pictorial representations of yoga, drawn in the 7th century, each chakra is represented by a lotus flower having a specific number of petals, a symbolic animal, a characteristic color, a mantra, a geometric shape and an image of a couple. male and female (Shiva and Shakti).

- Location & ndash; the coccyx, the base of the spine

It is from there (base chakra) that the energy flows to the crown chakra. It is also the place where the force of propulsion and circulation of energy (the kundalini) is developed.

- Geometric shape - a square that represents the element Earth.

- Symbolic animal - Gray elephant with 7 trunks which helps and guides to and towards concentration.

- Shiva and Shakti (the helping characters) - Appear in the right corner and represent Pingla, masculine energy current and Ida, feminine energy current. These two currents conduct energy to Sushumna, the main energy channel running along the spinal cord and which appears in the image above and below the chakra. Ancient poems describe the Shakti of this chakra as a Dakini, that is, the queen of the chakra who represents the revelation of pure intelligence. Shiva is called Brahma; he dispels fear and spreads grace

- The lotus petals - Four petals speaking to the four winds of the sky. On each of them is drawn a letter in Sanskrit.

- Associated with - emotions and sexuality

- Geometric shape - a circle representing the element water in which there is a half moon.

Water moves and appears in its movement with the same dynamics as the moon.

- Symbolic animal - the makara, or the legendary crocodile (fish). It is in the image inside the half moon shape. It sucks in, assimilates and strengthens energy.

- Shiva and Shakti - represent pingala (male force) and ida (female force) which conduct energy to sushumna (main channel that runs along the spinal cord). Shiva, here called Vishnu, is dressed in a yellow robe and wears a large ribbon representing the souls he aims to defend. Shakti, here called Rakini appears dressed in the color of lotus blue and has divine energy within her.

- Associated with - power and will.

- Name - this is the center of the fire; manipura means the city of diamonds.

- Location - the navel below the solar plexus.

- Shiva and Shakti - Shiva, here called Rudra appears covered with an ash-white color. With his hands he expresses the action of spreading grace and that of warding off fear. Shakti, here called Lakini, is the benefactor of the world. Dressed in a yellow gown and wearing various jewelry, she possesses the power to destroy and create.

- Associated with love and poise.

- the Name symbolizes the perpetual sound.

- Location - the region of the thorax.

- Geometric shape - a six-pointed star representing the element air. In the center of the chakra appears a golden triangle in which is located the linga of Shiva in the form of a white point resembling a gemstone.

Below this lotus, we can see a second smaller one on which is drawn a tree filled with precious stones representing the letters of the alphabet in Sanskrit. This tree is called the "tree of wishes". It is said that the yogi, at the end of his journey, rests at the foot of this tree.

- Associated with - communication and creativity

- Location - in front of the gorge.

- Geometric shape - a triangle in which there is like a kind of full moon (a circle) representing the element of space.

- Shiva and Shakti - Shiva, here called Sada-Shiva, spreads grace and dispels fear. Shakti, here called Shakini; she wears a yellow toga and remains quite white as the light. Pure and intact, it is placed in the region of the full moon representing the door to liberation. This is intended for those who aim for the spiritual richness of yoga and who have succeeded in overcoming the temptations of the senses.

- Associated with - intuition and imagination.

- Location - center of the forehead, between the eyebrows.

- Element - does not exist, associated with light.

- Geometric shape - In the lotus is a triangle or, energy or triangular energy. Yoni containing within it linga, is here called Itra - which means: "that which enables man to overcome the world of vagrancies". Above the triangle is a half moon on which is placed a yellow point representing the sun.

- Corresponding meaning - does not exist.

It is the center of the brain and potential faculties, including the realms of total perception and the sensory.

- Symbolic Animal - does not exist

- Shiva and Shakti - are united (the union of masculine and feminine) just as ida and pingala are united in sushumna. Shakti, called Hakini has six faces like the lunar faces. She also has six arms: the first holds a book, the second spreads grace, the third dispels fear, the fourth holds a skull which symbolizes the empty head of thoughts, the fifth holds a small drum and the sixth holds a chain that is used to count mantras. His conscience is pure.

- The lotus petals - two petals representing time and space. The letters inscribed on the petals: hang (or ham) and Ksha, together make up the word swan.

- Associated with knowledge and understanding.

- Element - does not exist

- Geometric shape - does not exist.

- Mantra - does not exist

- Meaning correspond - does not exist.

- Symbolic animal - does not exist.

- Shiva and Shakti are symbolically united without a concrete image.

- The petals - A thousand petals.

The number of alphabetic letters in Sanskrit is 50. In the seventh chakra, these same letters appear 20 times, which makes 1000.

Each revealed letter also represents a mantra which symbolizes the body of the divine. Through pranayama and the repetition of mantras, the sleeping force of the Kundalini (in the first chakra) awakens and moves towards the succeeding center, the highest, and so on up to the sixth chakra. It should be emphasized here that to get to this stage it is necessary to train for years in the yogic discipline.