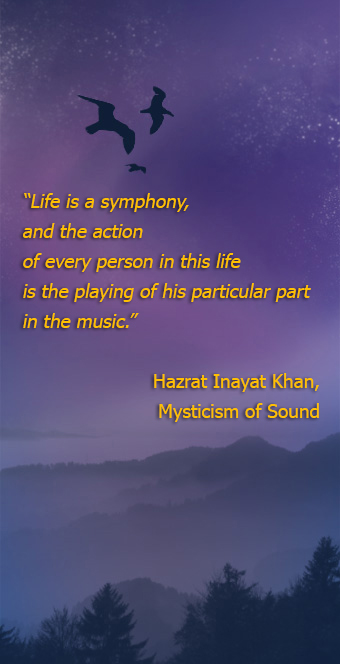 We work with eleven gongs of the Creation Series made by the Paiste Company. The gongs are named universe, earth, water, fire, heart (air), moon, sun, balance (throat, void or sky), confrontation, abdomen and head. These names are the results of careful research by Paiste, involving scientists, physicians, music therapists, psychologists and others. Five of the gongs have names of elements (earth, water, fire, heart, balance).

The sounds of the gongs are usually experienced in the related regions of the body. The earth gong usually relates to the lower part of the body, the legs and the coccyx; the water gong to the lower part of the abdomen, the region of the sex organs; the fire, sun and abdomen gongs are usually experienced in the solar plexus region; the heart gong (air), in the chest region; the head gong, in the head region and finally, the universe gong in the head and entire body.

There may be deviations from this description, but with long practice most people do learn to experience the full impact of the gongs in the mentioned regions.

We experienced the gongs in three steps:

What is there in this particular universe gong, which enables these kinds of visions?

First, the person can see his or her face and throat reflected through the middle of the universe gong that is about one meter in diameter. Then, while playing on the gong, its vibrations create a constant movement of back and forth, modifying the reflection of the observer’s face.

Many people see their reflected faces in an asymmetric way (one side might be blurred, one eye open and the other one shut; sometimes the reflected face seems very sad or happy, and so on). Usually, after several sessions the image changes and symmetry is restored.

The sound of the gong and the reflected image stimulate the imagination. If a person has difficulties with anguish or fear, for example, the balancing movement of the gong will bring up those hidden feelings from the subconscious. The participant is capable of perceiving his or her interior in a symbolic way, through the reflected image.

Now, repeat the process of playing and contemplating several times. After four repeats, the image will become more positive.  You go through a therapeutic process with no logical explanation or premeditation, but its effect derived from the process itself.

In another example, one of the participants saw herself as a Shoah survivor; the reflected image was very frightening to her. At the second meeting, the same woman became an Indian shaman, and at the third meeting, she saw herself full of joy with infinite possibilities of connecting with herself.

The process evolves with the repetition of meditation, playing the gong and contemplation: the first stage consists in bringing to light the sources of fear and anguish, and being conscious of their existence. The second stage triggers underlying inner forces, which act without interference on the conscious. Finally, in the third stage, one is already capable of expressing joy of life and embracing life fully. An energetic repair of underlying forces occurs in this stage. This repair occurs when the hidden potential residing in our grey cells starts to realize its capability. We regard it as a huge hidden optimistic energy source, which is in store in the brain waiting to be fulfilled.

Negative influence of the gongs

We must mention that playing on the gongs sometimes has negative manifestations. Some people complain of having a bad feeling, headaches, nausea, or stomach aches…when somebody plays too loudly on the gongs. Others say they feel awful while listening to the gongs, “like airplanes buzzing in my head”.

When seeing the universe gong, some people will feel aggressive and wish to hit it with all their might, while others will seek to produce the most impressive sound in order to show that they are leaders. They might use a metal mallet, shout by the gong or scratch as displays of hostile behaviour, or a need to be different or to stand out. They are invited to continue the session and, usually, with time and perseverance, their aggression dissipates, their sound becomes softer, and these unpleasant reactions disappeared.

How does this transformation occur? According to Noa Blass, it seems that there is a hidden process, which works and penetrates us like groundwater seepage. In fact, each one of us has an underlying personal “software” where the non-verbal can express itself – sounds, colours, forms and sensations. Each one of us progressively learns to be acquainted with his personal software.

When this software stabilizes, the person does not relinquish his aggression, nor does he feel the need to show off. When the powers of aggression and ego are balanced and sublimated, the way of playing the gong will also reflect this transformation; it will be softer, more sensitive and more stylized.

The time factor in the gongs playing

Every musical piece is bound in time. The connection between form, content and time is the key to meaningful musical expression. When you play an instrument like the piano, the violin or a wind instrument, you will usually play musical pieces of limited time-value notes.

In contrast, the gong provides the player with maximum freedom. The sound of the gong is not limited in a definite time. Its vibrations and echoes last long, and sometimes one echo embraces and superimposes with the following one.

In an analogy, imagine that you are a competitive swimmer. You dive into the pool at the sound of the start gun, you swim along your assigned lane, your motions are precise, and your goal is to achieve your fastest time. Contrast that with a different water experience: you stand on the seashore, the sea is rough and waves are breaking. You enter the water with some timidity; you tread the wet sand and let the waves wash against you as they come, with no limitation and with no premeditation. You stay on as long as you like, and, on a whim, you are done and make an exit.

When you play a melodic instrument, you think of each note you play, paying attention to its pitch and its length (time value). In contrast, when playing the gong, you have maximum freedom, which you can use in an unconscious way and which will bring, without any particular intention, a perception of your limits.

Similarly to the seashore image, when you improvise on the gongs, you will usually settle for a few notes and listen to them echoing. You might cut it short and return to your place in the room, since this kind of sound, similarly to the sensation of seawater, is new to you. With time, you gain experience and will not be afraid of the “waves” of sound, and allow yourself a longer immersion in them. At this stage, you will begin to perceive the echoes of the gongs and perceive the continuity of the sounds and their echoes.

The fact that the sounds are not melodic is an important part of the process: the sounds don’t tell a regular musical story which can be written in notes, but rather create an energetic continuity.

At this stage, without yet understanding what is happening, you find yourself in a certain depth of the water of this “sea”, and allow yourself to check your limits. You will try to feel what is the best-suited length for you to play on the gongs, without thinking about it consciously.

We emphasize that consciousness does not interfere with the process and you are capable of being much more spontaneous. This is the underlying secret of the process and its effect on the interruption of thinking and the increase of the available energy.

Gongs, bells and Tibetan bowls thus have a huge potential. When you decide to improvise on them without interrupting their sounds, you enter another dimension of time, in which the nature of the instruments have a major effect on determining the time factor, your personal reaction and that of the listeners.

In the oriental culture gongs are considered to be particularly effective in expelling demons. For hundreds of years Tibetan cymbals in monasteries served for this specific use. We find that to be true in the 21st century as well, where the same instruments drive out different sorts of devils disguised as aggression or as bombastic egos.

The 11 gongs of the creation

The influence of the gongs on the moon and sun, the yin and the yang (ida and pingala)

The sun and moon are part of the Creation Gongs. They have particular influence on the two energy currents in our spine, called in yoga terms ida – moon, and pingala – sun, or yin and yang.

The sun’s sound is warm and enveloping. When you play the sun you feel warmth in your body. The moon’s sound is more reserved and distant. When you play it you feel a pleasant coolness. When playing alternatively on both, you feel an energy flow spreading along your spine. You can alternate strikes on the two gongs or you can play a tremolo on them. This creates a unique prolonged sound, which can remind you of the gushing of a geyser.

The sun and moon gongs as help in difficult situations

When your energy is low, as after a sickness or another difficult event in life, the sound of the gongs can help you return to balance.

What can we learn from this? In this case, you learn that you need to increase the sun current (pingala or yang) in your body, as served by the sound of the sun gong. In other cases, other people may need to increase their moon stream (ida or yin) and the sound of the moon, with its deepness and silver tone, will help them. When both currents bring a good feeling it means that the balance exists.

These same gongs will also have a beneficiary influence in cases of light to severe depression. Sometimes the therapist will prefer the water gong to the moon gong, since the water gong increases fluidity in the body. The sun–water pair is interchangeable with the sun and moon gongs.

Another effective gong combination that fosters a sensation of well being is the sun, fire, abdomen and balance gongs. This combination envelops the waist area is with sound that brings harmony, warmth, love and softness.

The balance and confrontation gongs

The heart gong sound is extremely pleasant and can be associated with any other sounds of elements. It reminds many people of church bells.

The head gong sound is the sharpest of all gongs. Its sound is a well-defined la (A) pitch and it goes especially well with the universe gong. When you play the universe continuously and conclude with the head, you feel as if you were treated with a “cherry on the pie” – the sound of the head gong is carried on by the echoes of the universe.

The earth gong has the lowest sound of the series and is loved very much by most people. It gives you the sensation of space and confidence. In some cases people feel at first as if their earthly basis isn’t sufficiently strong and are somewhat threatened by this sound. However, after a while of practice (this might even take several months) they get acquainted with the sound and request that it be played for them. The sound brings up a difficulty, and they learn to get over it through the sound.