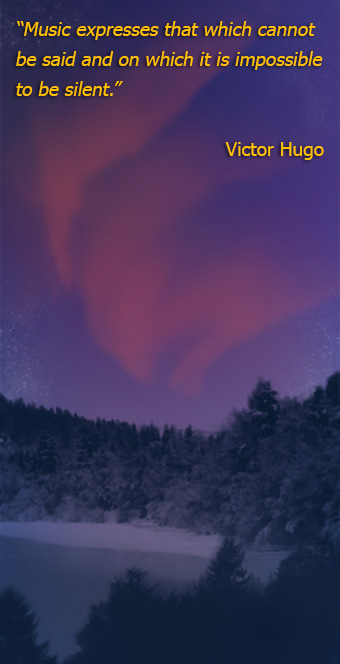 Nāda yoga promotes “union through sound”. It is the ancient Indian spiritual art and science of inner transformation through sound and tone. Meditation on sound is a universal path to self-realization, accessible to all, and appropriate for people of any religion or spiritual aspiration.

The premise of nāda yoga is that the cosmos, with human beings included, consists of sound vibrations, called nāda. It is the energy of sound in motion that forms the cosmos, rather than matter and particles.

Nāda yoga offers a way to respond and to approach sound with reverence, regarding sound and music as being more than mere sources of sensuous pleasure. It offers a path to deeper unity with both the outer cosmos and the world within.

Nāda yoga uses sound vibrations in pursuing palliative effects for various psychological and spiritual problems. It is also employed to raise the level of awareness of the chakra energy centres.

Music has been used by most Indian saints and prophets – among them are Thyagaraja, Kabir, Meerabai, Namdeo, Purandaradasa and Tukaram – as an important and powerful tool in the quest for of nirvana.

In the process of studying laya yoga, you learn to use three kinds of sounds:

The sounds of mantras – Lam, Vam, Ram, Yam, Ham and Aum or, in an alternative notation, Lang, Vang, Rang, Yang, Hang, and Aum. Each of these six sounds is associated with each of the first six chakras.

The sounds of gongs – Earth, Water (or Moon), Fire (or Sun, Abdomen), Heart (or Air), Head, Universe. We match six of the Paiste sound creation gongs with each of the first six chakras.

The sound of mantras

Mantra – from Sanskrit: manas – mind, consciousness, soul + tra, trayate – to free. The meaning is “liberating the mind, consciousness, soul, atma from repeated birth and death”. The mantra is a Sanskrit sound, syllable, word, or group of words (many times starting with Aum or Om), that is intended to create spiritual transformation. Its use and type vary by the school and philosophy associated with the mantra.

Each mantra has a specific meaning and a particular affect. Mantras form vibrations, which soothe, encourage and strengthen the devotee.

Lam or Lang is associated with the first chakra (Muladhara), whose element is Earth. Open your mouth wide, and let your tongue descend during the utterance. The lower part of the mouth represents the Earth element.

Vam or Vang is associated with the second chakra (Svadishtara), whose element is Water. A sort of inner whistling is created in the mouth; it represents an ascension of steam. The second chakra is related to the Water element as well as to the diffusion of energy.

Ram or Rang is associated with the third chakra (Manipura), whose element is Fire. While pronouncing the R, the sound descends to the lower back of the mouth, creating a sort of gargle, which resembles a blazing fire.

Yam or Yang is associated with the fourth chakra (Anahata), whose element is Air. While pronouncing it, you feel a sensation of sweetness in the palate.

Ham or Hang is associated with the fifth chakra (Vishudha), whose element is Void or Sky. While pronouncing it, you feel and hear the exhalation of the air, which reminds you of the transition of sound in the air.

Aum or Om is associated with the sixth chakra (Ajna). Open your mouth forming an O shape and close it on the M. The Om sound represents the whole cycle of being – from the very beginning until the end. No element is related to the sixth chakra.

The mantras have a different influence on each person. Together with conscious respiration and deep concentration, certain mantras can bring calm, serenity and in some cases, help remove pain.

The final M of the mantra transmits a feminine energy while the final NG a masculine one.  One chooses the appropriate kind not in relation to gender but rather according to which kind of energy the person needs.

In meditative concentration, associated with breathing and visualising the chakras in the body, you channel and direct each one of the tones of the major scale to the related chakras along the spinal column.

The working process is as follows: while inhaling and exhaling, you direct the tone to the related location in the body and, in parallel, feel and visualize this place in the body.

SI (B) – the seventh chakra

DO (C) – the eighth chakra, in the air above the crown of the head

Then do the same in reverse, from the eighth chakra down towards the first. Repeating this several times upwards and downwards instils a sensation of harmony between all parts of the body.